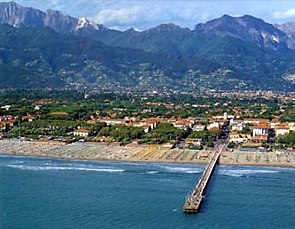 The youngest town in the Versilia, Forte dei Marmi sprang up around the old fort, built in 1782, after which the town is named and which is prominently located in the center of town. In the past, the jetty that extends 100 metres out from the shore into the ocean was used as a landing place for the ships that were used to transport marble from the mountains that rise above the coastline. The resort became famous when the Agnelli family built their summer residence here in the 1930's, eventually making Forte dei Marmi a very fashionable destination amongst wealthy industrialists and businessmen from the north. The towns quiet, leafy streets boast some of the most beautiful and elegant villas in Italy , and many European celebrities have homes here. Today, the beachfront at Forte dei Marmi is lined with elegant hotels, sophisticated nightclubs, and the town has some wonderful restaurants. Its shopping is unequalled in the Versilia, and many of Italy 's most famous names in clothing design-Gucci, Coveri-have flagship stores in Forte. Its large weekly market , held in a circular piazza near the center of town, is renowned throughout Italy for the wonderful array of household items, fashionable clothing and leather goods available at very reasonable prices. The main market is held every Wednesday morning and closes around 1.00 pm; a smaller market takes place on Sunday mornings at the same location.  Located north of Viareggio and Pietrasanta, take the Lungomare (seafront ) or the Aurelia to Forte.