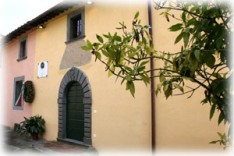 Celle Only about 25 km from Lucca situated in a beautiful mountain village about half-way between Lucca and Bagni di Lucca, Celle was the ancestral home of the Puccini family since before 1680 and was e largest house in the village.  Throughout the centuries, the people of this region survived on subsistence farming and occasionally traded their goods at market, so difficult was access to this part of Pescaglia. In 1719, Puccini’s ancestors moved to Lucca, but the house stayed in the family until 1970 when it was eventually aquired, 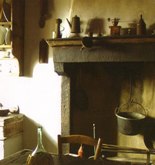 restored and inaugurated as a museum thanks to the Associazione Lucchesi nel Monde, a worldwide group of emmigrants from Lucca.  When Puccini was a child, he spent many happy summers here with his family escaping the stifling heat of Lucca.   Although Puccini didn’t visit Celle as an adult until a month before he died, he often remembered his blissful boyhood summers there.  On October 26, 1924, just a month before he went to the Brussels clinic, the City of Pescaglia honored the composer and his family heritage in Celle with a huge celebration that included 17 triumphal arches and an abundance of colored banners, and the laying of a commemorative marble tablet which can still be clearly seen today affixed to the house.  The hillside village of Celle, set amidst remote but glorious scenery, remains today largely as it has been for centuries, with beautifully-built stone houses and intricate pathways.  Grapes and olives are grown in abundance, and in late summer the delicate scent of ripening grapes and fermenting wine intoxicate the senses.  A stroll throught the village and a visit to the museum are not to be missed, as much for a look at life unchanged for centuries as anything else.  The house itself is over 500 years old and in splendid condition, beautifully maintained by 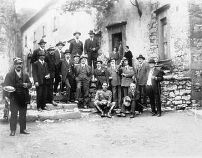 the Associazione.  It is full of family furniture,  photographs, letters and family artifacts from Puccini’s time and before.  The museum is open to the public.   To get to Celle, take the state road 12 from Lucca to Abetone.  After 15 km, at Diecimo, take the left turn to Pescaglia and continue for another 5km.  Turn right at the sign for Celle, and the village lies another 2 km up the hill.  The road is not suitable for tour buses.  As you leave Celle and pass through Diecimo to return to the main road, you will see a beautiful bell tower, part of the church of Santa Maria Assunta.  The church dates back to the 12th century, and its beautifully appointed interior makes a visit well worth while.