Located just 18 km north of Lucca on the state road to Abetone/Modena, Borgo a Mozzano is a charming town with cobbled streets and three wonderful very old churches. Like Lucca , Borgo a Mozzano was almost certainly inhabited by the Etruscans, but the community was really established by the Romans, who most certainly enjoyed a rich life there. It was a free city that yeilded artists, writers, poets and excellent craftsmen, and it was known for its works of art in wood and iron. Perhaps the most interesting and unusual landmark of this area is The Magdalene Bridge , that straddles the Serchio River , connecting one part of the town to the other. Its construction dates back to the 11 th century, however, the bridge was overhauled and repaired during the 13 th century, work that was carried out by the ruler of Lucca at the time, Castruccio Castracani, who added an extra arch to the famous silhouette.

The bridge is better known as Devil's Bridge , due to an ancient legend that tells of the master builder who was instructed by the townspeople to build the bridge. Being a man of his word and one who always fulfilled his obligations, he became alarmed when he realized he would not be able to complete the bridge within the time he had agreed. One evening, as he sat anxiously contemplating his situation on the bank of the river, the devil came to him and offered to finish the bridge overnight, if the builder would deliver to him the soul of the first one to cross the bridge after completion. The builder nervously agreed,

and the following day, the people of Borgo a Mozzano beheld their beautiful new bridge. Remembering his promise to the devil, he forbade the people of the village to cross the bridge, and went to seek the counsel of the Bishop of Lucca. On the Bishop's advice, the builder hurried back, and sent a pig across the bridge first. In a furious frustration, the devil plunged himself into the river, and has never been seen again at Borgo a Mozzano. Puccini once drove his car across this bridge in response to a bet, however, as the bridge narrowed Puccini was forced to retrace his steps, much to his chagrin, losing the bet. 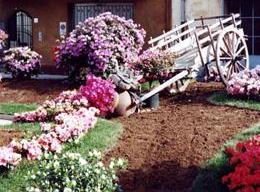 Borgo a Mozzano is also known for its Biennale Azalea, one of Europe 's foremost botanical shows, featuring the azaleas that grow abundantly in the area.