Now a well-known seaside resort, this town was named for the via Regia, the old road upon which the Republic of Lucca built a defense fortress for themselves and their allies, the Genovese, in 1117 against the Pisani. For hundreds of years, Viareggio remained uninhabited because of its swampy terrain, but in the middle of the 1400’s, the Lucchese decided to drain the swamps and build a harbour in order to protect their access to the coast.  In the 1550’s Torre Matilde was built to replace the previous fortifications, and today it remains Viareggio’s oldest monument. The construction of several other buildings was undertaken at the same time, including a church, Santissima Annunziata, which is in fact dedicated to St. Peter.  The church was restored and enlarged in 1740 as the population increased.  By the early 1600’s the town was beginning to grow and was elected the capital of the coastal area.  By 1700, it had become a city with the right to assemble a council.  Tourism began to develop in the middle of the 19th century because of the mild climate, and the emergence of public bathing establishments, a business which was booming by the early 1900’s.  However, a devastating fire in 1917 destroyed many of these fine old wooden beachfront buildings.  Today, the town’s passegiata is lined with glamourous shops, popular bars, cafes and restaurants, and is comprised of many splendid examples of buildings in the Liberty, art nouveau and art deco style.  The long sea front is comprised of soft sand and gardens with palms and orleanders.  When Puccini was forced to abandon the peace and tranquility of his home at Torre del Lago in 1921 because a noisy peat factory opened next to his house, he chose to move to Viareggio.  He began work on Villa Puccini on the north side of town in 1919, and moved in two years later.  A great lover of mechanical gadgetry, Puccini installed the first automatic water sprinkler in Italy in this garden.  It was here on via Buonarotti near the pinewood in this simple but elegant villa that Puccini composed most of Turandot, and it was from here that he began his final journey to Brussels in November of 1924. Today the villa is in private hands and is not open to the public.  Puccini’s favorite cafe in Viareggio was the Cafe Margherita, a well-known haunt of the city’s intellectual and artistic community, prominently located on the passeggiata (the boardwalk along the seafront).  Its beautiful exterior art deco ceramic paintings and decorations were created by Puccini’s good friend, Galileo Chini, who designed the first Italian production of Il Trittico, and later worked closely with the composer before his death on the visual aspects of the creation of Turandot.  Chini collaborated with architect Alfredo Belluomini on a number of buildings on the passegiata, whose richly ornate curves, rosettes, and roundels were glazed to resemble precious stones.  Today Cafe Margherita is still a popular watering hole for locals and visitors alike, and little has changed the atmosphere of  almost 100 years ago.  In 1873, a group of wealthy young men from Viareggio hatched a plan to create a special Carnival celebration.  They built and decorated floats, and then held a parade along the main street of the town.  The ritual grew as the years went by, until it became an art form that today employs thousands of artisans and people skilled in carpentry and ironwork for most of the year.  Today, Carnival is enormously popular, boasting satyrical and comical parade floats unequalled anywhere in the world, with five great parades that take place during the five weekends before Lent.  In 2000, the city opened the Cittadella de Carnevale, an enormous semi-circular collection of hangars in which the elements of Carnival are built.
The Cittadella also encompasses a Carnival museum, a papier-mache school and a large live performance space.  Viareggio is also a well-known international hub for boat building, an industry that was born out of the need for fishing boats and cargo vessels in the Middle Ages.  Originally building ships based on designs from Serrento, the master craftsmen of Viareggio defined their own style as time went by, and so too evolved the port’s reputation for building vessels of great elegance and seaworthiness.  During the 1960’s and 70’s, international demand for luxury motor yachts grew, and today, 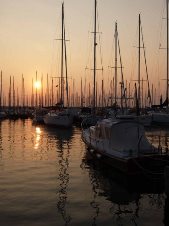 Viareggio is one of the foremost producers of such craft.  A short walk from the south end of the passegiata over the bridge that crosses the canal and into Darsena affords a glimpse into this part of Viareggio’s life, where can be seen some of the world’s finest yachts in the process of being completed lining the basins especially built for this purpose.  Continue along the canal and see the city’s oldest monument, Torre Matilde.  There is a small permanent market in central Viareggio, just a few blocks in from the beach, starting at via Mazzini, however, on Thursday mornings, the market triples in size and many local crafts and gourmet items can be found there amongst leather goods and high fashion items.  Viareggio  and can also be accessed from the autostrada  (motorway) A 12 from Genoa to Livorno.