Best known for the fact that Puccini wrote part of his La Bohème there,  this town lies in the Province of Pistoia, close to Lucca. 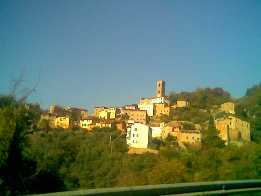 The ancient castle was once home to a francescan convent that was dedicated to the unkeep and education of orphans. The composer was at various times a guest in the Villa dei Lavoratti, and in the villa belonging to Count Orsi, and it was during the period from June to October 1895 that he continued his grand composition, La Bohème,  in situ.  As fervent as he was about nature, the wealth of wildlife in the area did not escape him, and he was known to have contributed to a guide to the local fauna.  Presently, a museum is planned for the ancient castle as a testimony of the great composer’s sojourns

here at Uzzano using the memorabilia that remains.